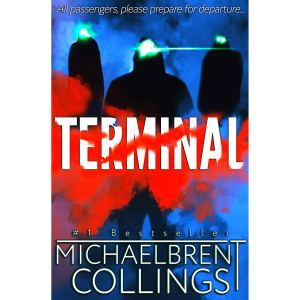 Michaelbrent Collings is a master of taking a familiar premise and putting his own unique spin on it. That’s the case with his latest, Terminal. The novel’s premise is one we’ve seen before in films like Circle, Cube, and many others. Please note, I’m not giving away the ending here, and the premise is clearly laid out in the book’s marketing materials: A bunch of strangers are trapped in an isolated place—here, a bus station in the middle of nowhere in the wee hours of the morning—and forced to select one of their number to survive; the rest will die. An impenetrable fog rolls in, so they can’t see what’s going on outside (though they do occasionally see things they’d rather not in the mist). Phones and other technology don’t work, so there’s no calling for outside help. Something that calls itself The Other explains the rules of the “game” to them and ensures they understand that the rules are going to be enforced with lethal finality. If anyone ventures outside the bus station prematurely, they will be killed, horribly. They have until dawn to make their decision. The vote must be unanimous, which means the most obvious way to survive is to ensure that everyone else is already dead.

With a plot like this, the story will make or break on the strength of its characterization. How does Collings do? Let’s start with the cast of characters: The single mom with a troubled childhood who runs the bus terminal; her teenage daughter; a tired cop who’s at the end of his career; a pair of newlyweds; an autistic man; a gangbanger; a grifter; a famewhore; a traveling saleswoman; and a madman who may have experienced this all once before and lived to tell the tale. All ordinary people, more or less, but interesting archetypes, and for the most part they simply want to get home or to wherever they were headed next before the horrors began. It’s a good set of characters and given that most of these characters have dark secrets buried in their pasts that are going to come to the fore during their final night on Earth, sets up some great conflicts and confrontations.

There are a couple of twists at the end that I’m not going to give away, but I will simply say that I didn’t expect the resolution of the story, or the unveiling of what was behind it all, but I probably should have. In any case, the novel’s resolution felt satisfying and that’s the important part.

While the characters, naturally, spend a great deal of time trying to figure out exactly what is going on and why this is all happening to them, and speculating that it must be aliens or other monstrous, inhuman beings to blame, Collings makes clear that the story is about man’s inhumanity to man. We don’t need aliens or monsters to explain evil—other people are explanation enough. Fun novel, fast paced, and if you’re a horror fan, this would make perfect summer reading for the beach. Great story, recommended.

One thought on “Book Review: Terminal by Michaelbrent Collings”

This blog will host my discussion of all things bookish: favorite authors and books, new acquisitions, book sales and coupons, the state of the publishing and book retail industries, reading culture, and, above all, book reviews. The subjects I read are eclectic and include: science fiction and fantasy, horror, pulp fiction, crime and noir, men’s adventure, history, graphic novels, and almost any other genre of literature save romance novels, technical manuals, and any other topic I deem “boring.”

I welcome comments on all my blog posts, even the old ones, so please feel free to comment. If you find one of my reviews interesting or provocative, let me know.

If you’re interested in purchasing a copy of a book that I have reviewed, please feel to use the Amazon links I have provided on the review, as using one of those will send a few cents my way. I am required to post the following statement: “As an Amazon Associate I earn from qualifying purchases.” But I promise my readers that the possibility of earning this pittance from Amazon has not affected the content or tenor of any of my reviews.

Review Policy: I am open to reviewing books (physical or eBook format) received gratis from publishers and authors, though I can only promise an honest review. Please contact me with an inquiry before sending a review copy, as I cannot promise to review all books.

I can be contacted via the blog or email: andrew dot byers at gmail dot com.

All blog contents, except for blog comments from readers © Copyright J. Andrew Byers, 2020. All rights reserved.