Readers of weird fiction have long been told of rare, mystic tomes and grimoires that hold untold knowledge and Secrets Man Was Not Meant To Know. Some of the most famous examples include H. P. Lovecraft’s Necronomicon, penned by that most famous of mad Arabs, Abdul Alhazred; Robert W. Chambers’ infamous play that must not be performed, The King in Yellow; and the much more recent Navidson Record, described by Mark Z. Danielewski. Literary scholars call this technique “false documents,” but doesn’t that seem to take all the fun out of it? I think it’s a lot more fun to pretend these tomes are real. In any case, there are some real-life occult tomes that have bedeviled scholars for centuries. Perhaps the most famous is the vaunted Voynich Manuscript. The Voynich Manuscript, or as Yale’s archivists unimaginatively describe it “MS 408,” is written in an unknown language and appears to contain detailed botanical and pharmacological studies of more than 100 unknown species of plants, along with some astrological diagrams and lots of other mystical gobbledygook.

The Voynich Manuscript has now been scanned in, in its entirety, and made available to the browsing public, courtesy of Yale University. They have also had a detailed chemical analysis of the manuscript performed, though to this layman, it doesn’t appear that it sheds much light on the subject. The language used in the manuscript has thus far resisted the best efforts of cryptolinguists, but we can only hope that some day we will crack the code. 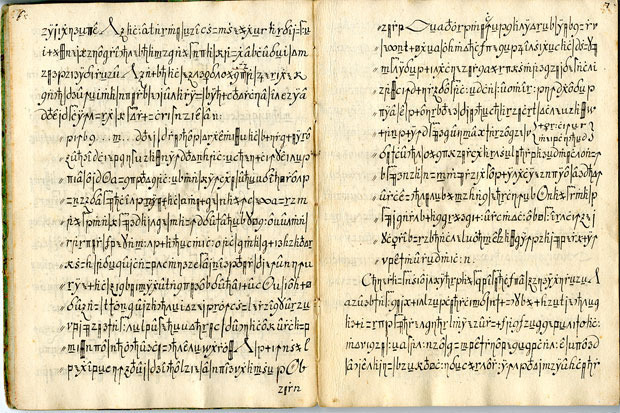 The Voynich Manuscript is not alone, of course, and another grimoire that had heretofore remained impenetrable is the Copiale Cipher. This was only made known in the West after it was discovered hidden in an East Berlin archive after the end of the Cold War. The Copiale Cipher, like its better-known counterpart, was clearly some kind of occult work, but it too was written in code. And unlike the Voynich Manuscript, the Copiale Cipher has now been cracked. As it turns out, the Copiale Cipher was the work of an old German secret society that appears to have been obsessed with eyeballs! You just can’t make this stuff up. See for yourself, the entire document has been decoded and translated into English. Perhaps not surprisingly, it was far easier to create mystic tomes that were undecipherable to the uninitiated in pre-modern eras.

2 thoughts on “Modern science is catching up with occult tomes”

This blog will host my discussion of all things bookish: favorite authors and books, new acquisitions, book sales and coupons, the state of the publishing and book retail industries, reading culture, and, above all, book reviews. The subjects I read are eclectic and include: science fiction and fantasy, horror, pulp fiction, crime and noir, men’s adventure, history, graphic novels, and almost any other genre of literature save romance novels, technical manuals, and any other topic I deem “boring.”

I welcome comments on all my blog posts, even the old ones, so please feel free to comment. If you find one of my reviews interesting or provocative, let me know.

If you’re interested in purchasing a copy of a book that I have reviewed, please feel to use the Amazon links I have provided on the review, as using one of those will send a few cents my way. But I promise my readers that the possibility of earning this pittance from Amazon has not affected the content or tenor of any of my reviews.

Review Policy: I am open to reviewing books (physical or eBook format) received gratis from publishers and authors, though I can only promise an honest review. Please contact me with an inquiry before sending a review copy, as I cannot promise to review all books.

I can be contacted via the blog or email: andrew dot byers at gmail dot com.

All blog contents, except for blog comments from readers © Copyright J. Andrew Byers, 2018. All rights reserved.